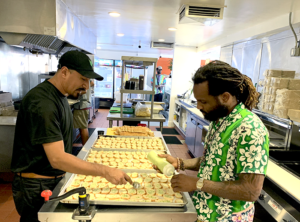 Originally launched in 2015, Grilled Fraîche began as a food truck and, two years later, opened its first brick and mortar location in Windsor Hills in 2017. The business is aimed at offering healthy food options and catering to areas often known as “food deserts.”

In early 2018, Peace was referred to the Harbor BSC strategic planning services for guidance on how to expand.

From 2018-2019, Peace received custom financial services including: profitability analysis, cost-structure optimization, tax consulting, and financial projections for new locations. Once these services were conducted, Peace and his business consultant determined that the best course of action was a two-phased expansion plan.

The first phase included the expansion to a new location at 853 East Manchester Boulevard in Los Angeles, which opened on September 7, 2019.Grilled Fraiche original food truck

Peace and the Harbor BSC are currently working on the second phase of the expansion and are in the process of packaging a $400,000-$500,000 loan for working capital for the Manchester location as well as to start the design, permitting and build-out of a third location in Ladera Heights, scheduled to open in 2020.

The two new restaurants are projected to create up to 35 new jobs with more plans to hire as the business grows.